Who’s The Boss- Your Head or Your Heart? 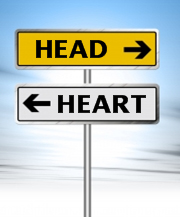 Most people, including 99 percent of the physicians of the world, incorrectly believe that thought creates feeling.  That is not true, never was, and never will be.  If conscious thought was “the boss,” the human race would likely have become extinct millions of years ago.  For example, let’s assume you are a caveman.  Even if you are the smartest person in the cave, you become bored and decide to take a walk.  As soon as you leave the cave, you encounter a Saber Toothed Tiger.  You now have three immediate problems you MUST solve as quickly as possible, or you will become that tiger’s lunch.  Your first problem is that you MUST recognize that you have a problem.  Your second problem is to figure out what to do about it.  Your third problem is to execute your plan quickly enough to prevent becoming the tiger’s lunch.  If the human race was dependent on that system, we would have never survived because the few seconds it would take to resolve your three problems would be more than enough time for the tiger to have his lunch.  Rather, it is this writer’s belief that the “flight-or-flight” emergency response system reflexively responds once the “fear” is activated by the production of adrenaline.  As a result, it is clearly how we feel that controls everything.  This includes the concept that “feeling” creates thought.  The problem is that the appearance of the Saber Toothed Tiger has changed over these millions of years.  Now, the tiger looks like the guy who ran you off the road on the Turnpike; or the spouse that spends too much money; or the boss you don’t like, or an endless number of Saber Toothed Tigers.

Given the above, the role of conscious thought is believed to take a secondary role in life, with the exception of solving relatively unimportant daily activities.  Any situation that has a potential adverse impact upon our safety, sense of well being, or our equilibrium, the conscious mind will not trigger a response.  How we “feel” triggers a protective response which is brought forward from our stored memories.  As a result, the concept of living in “the here-and-now” is believed to be an illusion.  Survival of the human race is solely dependent on our stored memories in a perpetual effort to keep us safe.  Accordingly, the best way to change tomorrow is to change yesterday.

All situations have two components.  One is the objective fact and the other is how we feel about it.  While objective facts cannot be changed, how we feel about them are very amenable to change.  If our problem(s) brings us into the psychotherapy process, focusing only on the present situation often ignores the core problem or a “triggering” event.  The maker of the universe, be it God or Mother Nature, created a bumper sticker which states… “those who ignore history are condemned to repeat it.”  Identifying and resolving our historical problems is the most important mechanism, or tool, in changing and improving our future.  This is the most important and potentially beneficial road we can travel which will lead to personal growth and development.  This can be accomplished through the psychotherapy process, but also by reading, or perhaps taking a class.  Regardless of the method, ignoring the past only guarantees a future without change.